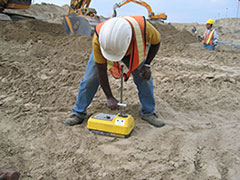 Portable gauges are used in industries such as agriculture, construction and civil engineering to measure things like the moisture or compaction in soil and the density of asphalt in paving mixes.

The Canadian Nuclear Safety Commission licenses the use of portable gauges and certifies their designs.

Direct transmission is considered more precise than the backscatter method, since it produces less error in measuring composition and compensates for surface roughness.

For example, to measure soil density, the source rod is placed in a tube and inserted beneath the surface through a punched access hole. Radiation is then transmitted from the source to a detector on the base of the gauge.

The compaction of the soil is determined by the radiation intensity level at the detector.

The backscatter method eliminates the need for an access hole by allowing both the source and detector to remain on the surface.

Radiation is directed beneath the surface, where some radiation is reflected, or “scattered”, back to the gauge detector by the surface material.

This method can be used to measure the material’s moisture content using a neutron source or its density using a gamma source.

When used to measure density, it is less accurate than direct transmission because of the large scattering angle and shallow depth of measurement.

The backscatter method is also insensitive to density variations beyond a depth of 5 to 7.5 cm (2 to 3 inches).

However, the backscatter method is quicker and easier than direct transmission and is useful when measuring uniform material such as asphalt. 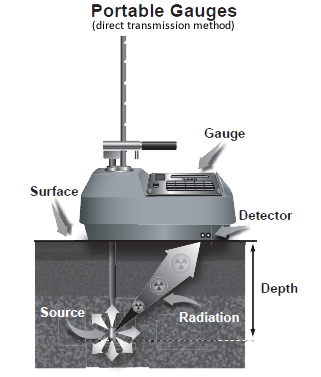 This figure demonstrating direct transmission shows the gamma source rod placed underground via a tube. Radiation is transmitted directly to the detectors on the bottom of the gauge, allowing accurate measurements of compaction. 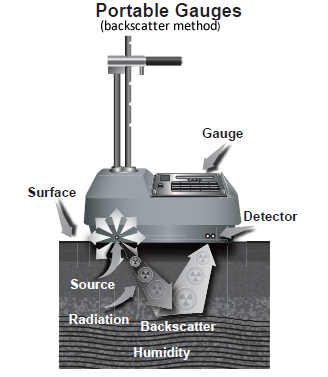 With the backscatter method, the neutron source remains above the surface. Radiation is emitted into the ground and scattered back to the detector to provide a measurement of moisture content or material density.