As part of its non-proliferation efforts, Canada has converted its research reactors to low-enriched uranium and is sending back used HEU to licensed sites in the U.S. to help consolidate HEU inventories.

In April 2010, Canadian Prime Minister Harper and U.S. President Obama committed to returning spent HEU fuel to the U.S. as part of a broad international effort to consolidate HEU inventories in fewer locations around the world. The commitment promotes non-proliferation by removing existing weapons-grade material from Canada and eliminates a nuclear liability for future generations of Canadians. Once the material is returned to the U.S., it is reprocessed and used in American nuclear power plants to produce energy. 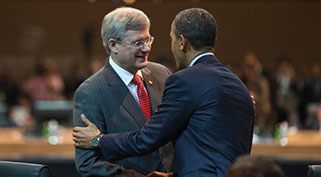 The Prime Minister announces an agreement with the United States to repatriate inventories of highly enriched uranium (March 2012).

Following the 2010 agreement, Prime Minister Harper committed to repatriating additional Canadian HEU inventories, including those in liquid form (known as highly enriched uranyl nitrate liquid, or HEUNL) from past production of medical isotopes.

Canada is one of the world’s major producers of nuclear substances (radioactive material) and has an excellent safety record for transporting such substances.

More than a million packages containing nuclear substances are transported safely in Canada each year.

The CNSC and Transport Canada share the responsibility for ensuring the safe transport of nuclear substances.

Canada also has vast experience in transporting large quantities of solid radioactive materials. For instance, Canada is a major producer of cobalt-60 sources, which are used in radiation therapy and in several industrial applications (for example, irradiation to destroy potentially harmful bacteria in food or on medical equipment).

CNSC inspectors perform regular inspections to verify that licensees and carriers are complying with regulations.

In 2014, the CNSC received an application for package design certification and assessed it to ensure that it satisfied all regulatory requirements. The Technical Assessment Report on the NAC-LWT Package Design for Transport of Highly Enriched Uranyl Nitrate Liquid was available for written public comment from December 23, 2014, to February 9, 2015. The report included an environmental assessment performed under the Nuclear Safety and Control Act.

On July 10, 2015, the CNSC issued a certification for the NAC-LWT package design for the transport of HEUNL.

The package design for the transport of HEUNL required certification by both U.S. and Canadian authorities before it could be used.

In order to be certified in Canada, a package design has to undergo stringent testing, which simulates both normal and hypothetical conditions of transport. The tests can include free-drop testing, puncture testing and thermal testing.

The package design must comply with the CNSC Packaging and Transport of Nuclear Substances Regulations, 2015. These regulations, based on the International Atomic Energy Agency’s Regulations for the Safe Transport of Radioactive Material, establish strict standards of safety that provide an internationally acceptable level of control of the radiation, nuclear criticality and thermal hazards to persons, property and the environment associated with the transport of radioactive material.

Users must also register the use of the package with the CNSC and acknowledge that the necessary training to properly prepare the package for shipment is in place. The CNSC will only certify the package when it is certain that the package satisfies all regulatory requirements.

The application for a CNSC transport licence must include a transport security plan, which requires:

Under Transport Canada’s Transportation of Dangerous Goods Regulations, any shipment of fissile material (such as HEUNL) requires an emergency response assistance plan that must be approved by Transport Canada. The Transport Canada regulations also require the consignor to display a 24-hour emergency telephone number on all shipping documents that accompany each shipment to ensure that appropriate technical assistance is immediately available to emergency first responders.

The CNSC will issue the transport licence only when it is certain that the shipment satisfies all regulatory requirements.

The CNSC also requires that an export licence be issued for these shipments. The licence ensures that the material conforms to Canada’s nuclear non-proliferation policy, international obligations and commitments, and regulatory requirements, and that the material being transferred is used in only peaceful applications.

Under the joint regulatory oversight of the CNSC and the USNRC, CNL has been safely returning materials that contain HEU from the CRL site in Chalk River, Ontario, to the Savannah River Site in Aiken, South Carolina.

The project, which began in 2017 and ended in August 2020, involved 115 separate truck shipments, resulting in the return of more than 161 kilograms of HEU. Over the course of the campaign, the shipments covered more than 240,000 kilometres of safe and secure transportation, equivalent to traveling around the Earth 6 times.

From the inception to the completion of this project, CNSC staff maintained a strict regulatory oversight and presence during shipments and confirmed that all health, safety, security and international commitments were satisfied. The completion of the TRM project fulfills Canada’s commitments to the Global Threat Reduction Initiative, and it reduces the nuclear liability and risk for future generations.