Fatigue is widely recognized to affect fitness for duty because of its potential to degrade several aspects of human performance. Therefore, licensees must address fatigue as part of their approach to ensure that workers are fit for duty.

REGDOC-2.2.4, Fitness for Duty, Volume I: Managing Worker Fatigue, specifies requirements and gives guidance for managing worker fatigue with the aim of minimizing the potential for errors that could affect nuclear safety and security. Managing worker fatigue encompasses measures to manage risks associated with fatigue, including measures to manage the level of fatigue that workers experience at work and to reduce the likelihood and consequences of fatigue-related errors (1). For the purpose of the regulatory document (REGDOC), fatigue is defined as a state of reduced mental or physical performance capability resulting from sleep loss, extended wakefulness, phase of the circadian rhythm, or workload.

The purpose of this synopsis of science and benchmarking is to inform the Commission and to address a range of comments received during public consultation. The REGDOC has been modified to address many concerns raised by stakeholders during public consultation about operational needs and administrative burden while maintaining a basis that is defensible based on benchmarking and on scientific research about the effects of fatigue on human performance. The limits on hours of work and recovery periods in Section 4 of the REGDOC have been reviewed against scientific research, compared to requirements of other regulatory bodies, and tested using a bio-mathematical fatigue model. Independent research reports commissioned by the CNSC over several years have been considered in the development of this REGDOC (2; 3; 4).

The following findings regarding the effects of fatigue on human performance form the basis for the provisions in the REGDOC.

2.0 Rationale for Requirements and Guidance in REGDOC 2.2.4

Programmatic elements in Section 3 are applicable to the broad population. The broad population includes workers who have the potential through their work activities to pose a risk to nuclear safety or security.

The rationale for requirements and guidance in the REGDOC is outlined in the following sections.

Workplace fatigue is a potential risk that needs to be managed, especially in 24/7 operations that require work schedules that interfere with sleep (e.g., extended shifts, rotating shifts, night shifts) (30; 4; 35). In addition to measures that reduce the occurrence of fatigue, additional fatigue mitigation strategies are needed to reduce the likelihood and consequences of fatigue-related errors (35; 8; 36; 37). A third-party review conducted for the CNSC recommended that the effectiveness of hours of work and recovery requirements could be augmented through implementation of fatigue risk management systems (4).

Even when complying with limits on hours of work, a worker may be fatigued. Since factors at work and outside of work affect fatigue, workers share responsibility with the employer for managing fatigue. 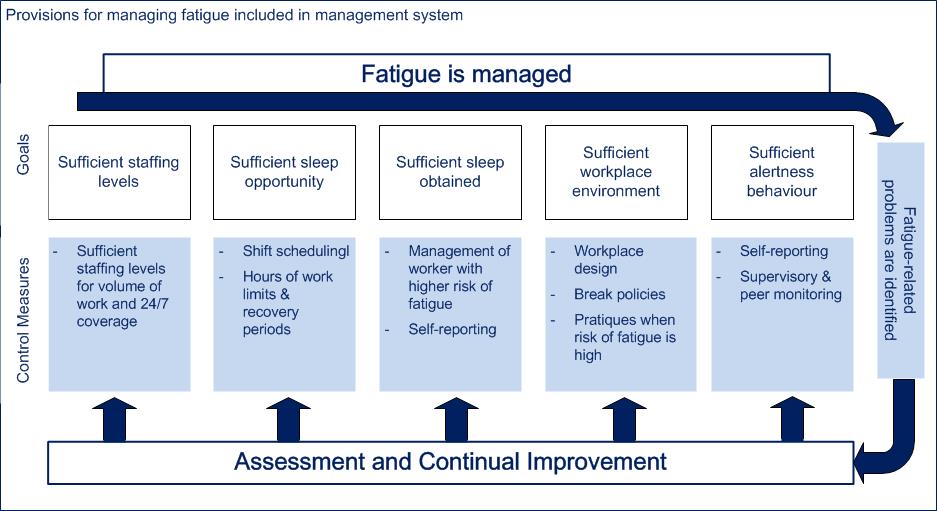 Staffing levels, which affect overtime levels, are an important contributor to fatigue (36; 3). A research report conducted for the AECB cautions that understaffing "is likely the largest contributor to fatigue levels in continuous operations. An understaffed operation typically results in high levels of employee overtime, thus reducing the amount of rest days and contributing to fatigue" (3 p. 14). As part of the programmatic elements, the REGDOC requires licensees to conduct periodic assessments to verify that staffing levels are sufficient for enabling adherence to limits on hours of work and recovery periods.

Work schedules established by the organization affect the sufficiency of sleep opportunities because they define the boundaries for the timing and duration of sleep (41). Key aspects of a work schedule that affect sleep opportunities are night work and the duration, frequency, and sequencing of successive shifts. Section 2.2 provides more information about the rationale for the REGDOC’s requirements applicable to hours of work and recovery periods.

The sufficiency of sleep obtained is also affected by factors outside of work. For example, certain circumstances or conditions, such as sleep disorders or medical conditions, affect the quality and quantity of sleep a person obtains, and thus, increase the likelihood of people experiencing high levels of fatigue (14; 42; 43; 44; 45). The REGDOC addresses the sufficiency of sleep obtained through processes for identifying and managing fatigue and through expectations for initial and ongoing training and education.

The workplace environment can be designed to promote alertness and to manage risks associated with fatigue. For example, in the middle of the night when high levels of fatigue are expected, additional administrative measures could be implemented, such as increased supervisory oversight and independent verification. Rest periods that include an opportunity for sleep are an evidence-based strategy to reduce fatigue levels and improve human performance (46; 47; 48; 36). The REGDOC clarifies that there are no regulatory impediments to licensees permitting sleep at work as a fatigue countermeasure, as long as appropriate conditions are defined. Section 3.2 of the REGDOC includes guidance related to the workplace environment.

The final barrier in Figure 1 of sufficient alertness behaviour requires supervisors and workers to be aware of signs of high levels of fatigue in themselves and in peers, so appropriate actions can be taken. However, self-identifying high levels of fatigue may be challenging because people may not perceive their performance to be affected by fatigue (7). The REGDOC includes requirements for training and education and for the process to follow if a worker may be unable to competently and safely perform his/her assigned duties because of fatigue.

2.2 Limits on Hours of Work and Recovery Periods

The prescriptive hours of work limits and recovery periods in Section 4.2 and 4.3 of the REGDOC specify outer limits applicable to the subset of workers who fill SSPs. The REGDOC also includes guidance stating that licensees should establish administrative limits that prevent workers from consistently working the maximum allowable hours of work.

2.2.1 Effect of Time of Day on Cognitive Performance

The REGDOC includes limits on hours of work for a 24-hour and 48-hour period and a recovery period between shifts. These restrictions are intended to limit extended wakefulness by providing workers with time for sleep daily.

Effect of Sleep Loss Across Successive Days on Cognitive Performance

Recovery periods enable people to recover from the sleep debt that has accumulated over successive shifts. The recovery period following night shifts also accounts for the circadian re-adjustment required to return to a day schedule.

As the hours worked in a week increase, opportunities for recovery decline. Weekly limits, as well as longer term limits, provide a safeguard against cumulative fatigue.

Limit weekly hours as a safeguards against cumulative fatigue

CNSC staff reviewed regulatory requirements from nuclear regulators internationally and from a range of other industries, including aviation, road transport, petrochemical, and pipelines. Direct contact was made with nuclear regulators from several countries (e.g., US, United Kingdom (UK), Romania, China, Korea, Switzerland, France, Sweden, Finland) as well as with Transport Canada and NAV Canada.

Tables 1 to 3 include some of the benchmarking data considered.

Some trends observed in the benchmarking data are as follows.

Table 1: Benchmarking of daily limits and recovery periods in other jurisdictions

1N/A indicates that the legislation does not include this requirement
2Canadian pilots shall be "provided with an opportunity to obtain not less than eight consecutive hours of sleep in suitable accommodation, time to travel to and from that accommodation and time for personal hygiene and meals"
3Guidance in draft REGDOC: A worker should normally be given 11 consecutive hours free from work between shifts. A recovery period of 8 hours should be rarely used (for example, if necessary to fill a minimum staff complement position; when the recovery period occurs at night when the body’s circadian rhythm promotes sleep).
4Permissible flight duty period for US pilots is dependent upon start time and number of flight segments; if certain conditions are met (e.g., augmented crews, bunks, in-flight sleep opportunities), permissible flight duty periods may increase up to 19 hours.

5N/A indicates that the legislation does not include this requirement
6Limits applicable to 7-day and 28-day period are also in EU Commission Regulation No. 83/2014 related to air operations
7Transport Canada is proposing new limits applicable to pilots that are similar to those of the US and EU (105).
8US NRC licensees may select a limit of 54 hours per week averaged over 6 weeks as an alternative to the requirements for a minimum number of days off.


Table 3: Benchmarking of limits on consecutive shifts and recovery periods

9N/A indicates that the legislation does not include this requirement
10Table presents restrictions on consecutive shifts and recovery periods that exceed requirement in most jurisdictions for at least 24 hours off / 7-day period.
11The EU Working Time Directive includes the following restriction on night work: "normal hours of work for night workers do not exceed an average of eight hours in any 24-hour period".
12Recovery period requirements in US NRC 10 CFR Part 26 vary depending upon position (e.g., security – 3 days off; operations – 2.5 days off; maintenance – 2 days off per week averaged over shift cycle)
13US NRC day off requirements are reduced during outages (e.g., Operations – at least 3 days off in each successive 15-day period; maintenance – at least 1 day off in any 7 days); recovery period of 34 hours in any 9-day period is applicable at all times

2.2.7 Ranking of Limits on Hours of Work and Recovery Periods

Models that integrate scientific information about circadian rhythms, wakefulness and recovery periods are available to predict levels of fatigue (106; 107). The "strongest scientific basis of fatigue models is that they capture important fatigue trends", so they are a useful tool for comparing different work schedules for a workforce (107 p. 23).

CNSC staff applied the bio-mathematical model FAID, version 2.2.0.210 (2014), to various work schedules that are permissible and non-compliant with the REGDOC. FAID, which was developed by the Centre for Sleep Research at the University of South Australia, is a well-known model that is widely used, including in aviation in Canada and in rail in Australia (108; 109). Due to the limitations of fatigue models, the results from the review of work schedules using the FAID model have been considered as an adjunct to scientific literature and benchmarking (106; 107; 108; 110).

FAID software is based on a token economy. Fatigue tokens accumulate during work and recovery tokens accumulate during non-work periods (111). The fatigue value of work and recovery value of non-work periods are based on their length, circadian timing and how recently they occurred (111 p. A62). Using the model, "more recent work/non-work periods make a greater relative contribution to the overall fatigue score than less recent work/non-work periods" (111 p. A62). Based on validation activities with data collected in labs and workplace settings, the FAID model is able to discriminate between more and less demanding schedules (111). 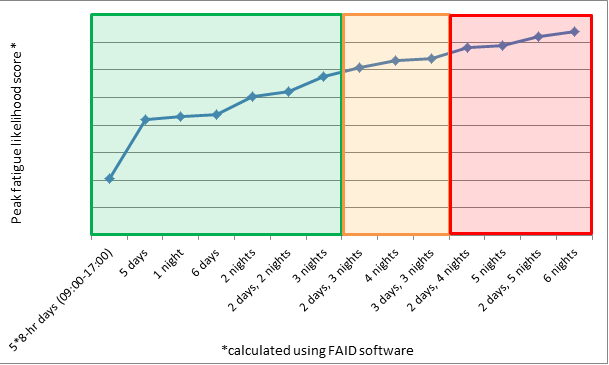 The REGDOC includes a comprehensive suite of requirements and guidance for managing worker fatigue. These measures are intended to reduce the occurrence of high levels of fatigue and to reduce the likelihood and consequences of fatigue-related errors.

The requirements and guidance in the REGDOC are informed by scientific information about the effects of fatigue on human performance and on benchmarking with other regulatory bodies. In response to comments received during public consultation, the regulatory requirements have been modified to increase the focus on the highest risk aspects of shift work: extended shifts longer than 10 hours and night work. CNSC staff considered requests for revisions to the REGDOC received during public consultation in light of scientific information and benchmarking. Requests were also considered based on how they would affect the rank ordering of limits within the REGDOC, as shown in Figure 3.

CNSC staff will continue to monitor science and regulatory practices related to fatigue management and will consider any new information for incorporation into subsequent versions of the REGDOC.