Used nuclear fuel produces ionizing radiation. This type of radiation has a strong ability to penetrate matter, so shielding against the radiation is required. Since used nuclear fuel contains significant quantities of radionuclides with long half-lives, it requires long-term management and isolation. 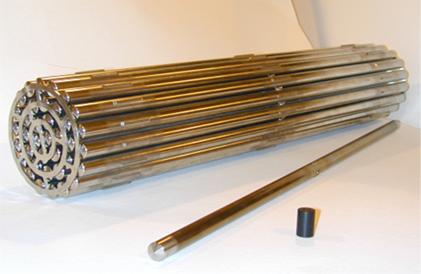 Canada's inventory of used nuclear fuel comes mostly from the operation of nuclear power plants. The remainder of the used nuclear fuel – which accounts for approximately 2% of the total – comes from prototype reactors (used to test full-power reactor designs) and research reactors.

Since the 1960s, Canada's nuclear power reactors have used over 2.5 million fuel bundles. If these bundles were packed end to end, they would fit into a space the size of seven hockey rinks, stacked to the top of the boards.

After being removed from the reactors, used nuclear fuel bundles are stored for 7 to 10 years in storage bays (pools of water), which provide cooling and shielding against radiation. 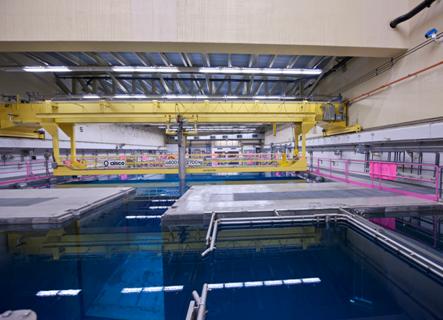 The pools for the used nuclear fuel are constructed in-ground and are seismically qualified (which means they are built to meet seismic standards for earthquakes. They are housed in buildings that are separated from the reactor buildings.

The walls and floors of the pools are about two metres thick and made of concrete reinforced with carbon steel.

Robust, heat-resistant and water-tight liners are installed in the pools to prevent water from leaking through possible defects in the concrete.

The pools are inspected regularly, under the supervision of CNSC specialists.

Since the March 2011 accident in Fukushima, Japan, all nuclear power plant operators in Canada have acquired additional transportable equipment (such as portable generators and pumps) to ensure pools can be filled with water, regardless of an accident's severity.

Each year, 4,500 to 5,400 fuel bundles per power reactor are added to the pools (based on 80 percent to 95 percent of full-power reactor operation).

After 7 to 10 years in wet storage, the used nuclear fuel can be safely transferred to dry storage.

There are three main types of dry storage units used in Canada:

Concrete canisters, or silos, were developed in the 1970s by Atomic Energy of Canada Limited (AECL) at Whiteshell Laboratories in Manitoba, to demonstrate that dry storage for used reactor fuel was a feasible alternative to underwater storage.

Each silo can hold between 325 and 600 bundles, and is built on reinforced concrete foundations.

The MACSTOR units, also developed by AECL, are similar to silos, but much larger. Each MACSTOR unit can store 12,000 bundles of used fuel.

Dry storage containers were developed by Ontario Power Generation (OPG) and are made of reinforced concrete encased in interior and exterior shells made of carbon steel.

The containers are transportable and are filled with helium (an inert gas), which protects the fuel bundles from potential oxidation.

Each container unit is designed to hold 384 fuel bundles and weighs approximately 60 tonnes when empty and 70 tonnes when loaded.

The dry storage containers are currently used to store the used nuclear fuel from the Pickering, Darlington and Bruce A and B nuclear power plants.

Operating experience and rigorous inspections carried out over the last 35 years have demonstrated that different types of dry storage units used in Canada can all effectively contain radiation.

All transfers of used nuclear fuel from wet storage to dry storage are conducted under surveillance of the International Atomic Energy Agency. 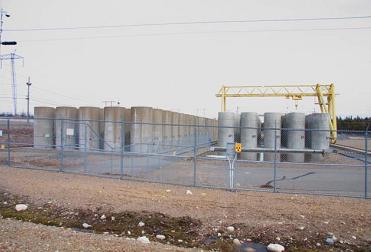 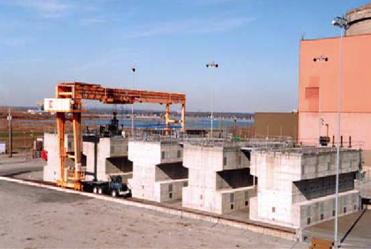 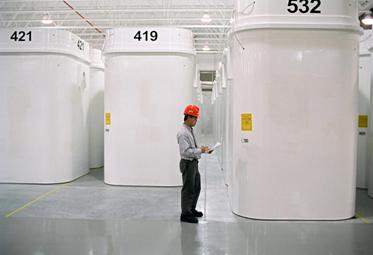 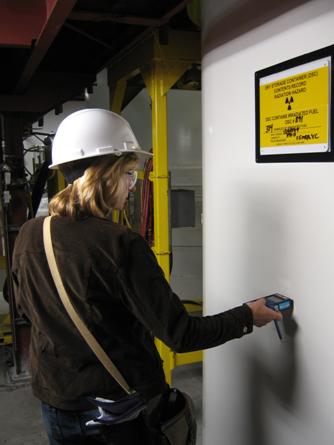 Two of the four SLOWPOKE-2 reactors in Canada use LEU (below 20 percent uranium-235), and two use HEU.

All SLOWPOKE-2 cores are preassembled, last 20 to 30 years, and cannot be modified by the licensee.

Once used, the complete core is removed and is sent to Chalk River Laboratories (for waste management storage) or repatriated to the United States.

The McMaster Nuclear Reactor completed its transition from HEU to LEU in 2006-07. Some of the LEU nuclear fuel used in the core originates from France. All remaining inventory of HEU fuel at the reactor was repatriated to the United States.

The radioactive waste and used nuclear fuel for the NRU and ZED-2 reactors at Chalk River Laboratories is stored onsite.

A small amount of non-nuclear-fuel high-level waste exists in Canada, and all of it is kept at the Chalk River Laboratories (CRL).

This waste comes from two main sources: the production of medical isotopes and waste generated from early reprocessing experiments conducted from the 1940s to the 1960s.

Highly enriched uranium targets are used at CRL to produce life-saving medical isotopes. The targets are inserted into the NRU reactor, removed and dissolved to harvest the isotopes. Some of the earlier waste is in liquid form, while more recent waste is being solidified.

CRL stores liquid waste which resulted from fuel reprocessing (done between 1949 and 1956). The waste is stored in three tanks. The last transfer of radioactive liquid solutions to any of these storage tanks occurred in 1968, and no liquids have been added since then.

Between 1958 and 1960, AECL conducted some experiments to convert high-level radioactive liquid solutions into a solid (glass). The program generated 50 glass blocks, each weighing about 2 kilograms, which are now safely stored onsite. 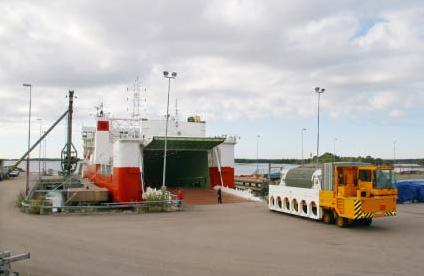 The CNSC certifies the design of the packages required for the transport of used nuclear fuel and other high-level radioactive waste.

The design of certified transport packages must demonstrate the ability to retain their contents under accident conditions.

For instance, Canadian regulations require all certified packages to undergo stringent testing, including the ability to withstand the cumulative effects of a 9-metre drop onto an unyielding surface, a 30-minute thermal test at 800°C, and immersion in 15 metres of water for 1 hour without a breach of containment.

High-level radioactive waste has been transported safely nationally and internationally for over 45 years by road, rail, water and air, without a single radiological incident. 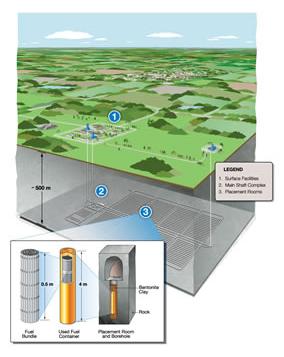 The Nuclear Waste Management Organization (NWMO) is responsible for the long-term management of Canada's used nuclear fuel from the operation of nuclear power plants.

In May 2010, the NWMO launched its site selection process for a willing and informed community to host a geological repository for the long-term management of Canada's used nuclear fuel.

As Canada's nuclear regulator, the CNSC is responsible for licensing geological repositories intended to provide long-term management of radioactive waste.

Please take a few minutes at the end of your visit today to anonymously tell us about your experience with the Canadian Nuclear Safety Commission’s (CNSC) website.

Choosing “Yes, after my visit” will open a new window that you can return to once you complete your visit to our website.

Yes, after my visit No, thank you