Radiation is energy in motion, in the form of waves or streams of particles. Radiation has always been present and is all around us in many forms.

When people hear the word radiation, they often think of atomic energy, nuclear power and radioactivity, but radiation has many different forms and comes from many other sources. Sound and visible light are familiar forms of radiation; other types include ultraviolet radiation (that produces a suntan), infrared radiation (a form of heat energy), and radio and television signals. These are examples of non-ionizing radiation.

Ionizing radiation has the ability to knock electrons out of orbit around atoms, upsetting the electron/proton balance and potentially damaging cells. Examples include alpha, beta, gamma and neutron radiation and x-rays.

Life has evolved in a world with significant levels of ionizing radiation and our bodies have adapted to it. 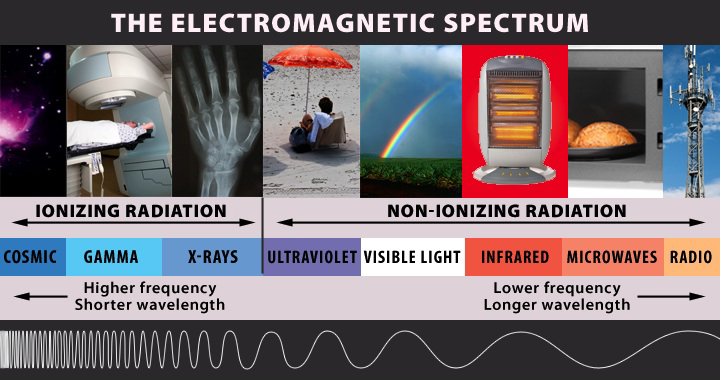 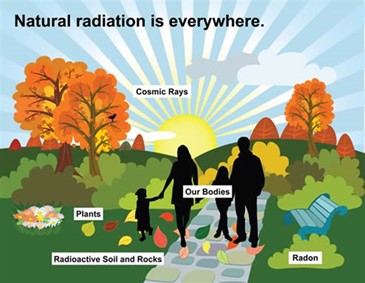 Background radiation is a constant source of ionizing radiation present in the environment and emitted from a variety of sources. According to the United Nations Scientific Committee on the Effects of Atomic Radiation (UNSCEAR), there are four major sources of natural radiation: cosmic radiation, terrestrial radiation and intakes of naturally occurring radionuclides through inhalation and ingestion.

The earth’s outer atmosphere is continually bombarded by cosmic radiation. Usually it originates from a variety of sources, including the sun and other celestial events in the universe. Some ionizing radiation will penetrate the earth’s atmosphere and become absorbed by humans which results in natural radiation exposure.

The composition of the earth’s crust is a major source of natural radiation. The main contributors are natural deposits of uranium, potassium and thorium which, in the process of natural decay, will release small amounts of ionizing radiation. Uranium and thorium are found essentially everywhere. Traces of these minerals are also found in building materials so exposure to natural radiation can occur from indoors as well as outdoors.

Once released into the air, these gases will normally dilute to harmless levels in the atmosphere but sometimes they become trapped and accumulate inside buildings and are inhaled by occupants. Radon gas poses a health risk not only to uranium miners, but also to homeowners if it is left to collect in the home. On average, it is the largest source of natural radiation exposure.

Trace amounts of radioactive minerals are naturally found in the contents of food and drinking water. For instance, vegetables are typically cultivated in soil and ground water which contains radioactive minerals. Once ingested, these minerals result in internal exposure to natural radiation. Some of the essential elements that make up the human body, mainly potassium and carbon, have radioactive isotopes that add significantly to our background radiation dose.

Effective dose is a general term that refers to the amount of energy absorbed by tissue from ionizing radiation. The effective dose is measured in sieverts (Sv) and is more commonly expressed in units of either millisieverts (mSv) – which represents a thousandth of a sievert – or microsieverts (μSv) – one millionth of a sievert. The total worldwide average effective dose from natural radiation is approximately 2.4 mSv per year; in Canada, it is 1.8 mSv. In some parts of the world, it is naturally much higher – for instance on the Kerala Coast in India, the annual effective dose is 12.5 mSv. The dose varies with the source of the radiation. For example, in northern Iran, geological characteristics result in a dose that can reach 260 mSv a year.

Regions at higher altitudes receive more cosmic radiation. According to a study by Health Canada, the annual effective dose of radiation from cosmic rays in Vancouver, British Columbia, which is at sea level, is about 0.30 mSv. This compares to the top of Mount Lorne, Yukon, where at 2,000 m, a person would receive a dose of about 0.84 mSv annually. Flying in an airplane increases exposure to cosmic radiation, resulting in a further average dose of 0.01 mSv per Canadian per year.

There are also natural sources of radiation in the ground, and some regions receive more terrestrial radiation from soils that contain greater quantities of uranium. The average effective dose from the radiation emitted from the soil (and the construction materials that come from the ground) is approximately 0.5 mSv per year. However, this dose varies depending on location and geology, with doses reaching as high as 260 mSv in Northern Iran and 90 mSv in Nigeria. In Canada, the estimated highest annual dose for terrestrial radiation is approximately 1.4 mSv, as measured in the Northwest Territories.

The earth’s crust produces radon gas, which is present in the air we breathe. Radon gas naturally disperses as it enters the atmosphere from the ground. However, when radon gas enters a building (through the floor from the ground), a concentration of it tends to build up. Long-term exposure to elevated levels of radon increases the risk of developing lung cancer. The worldwide average annual effective dose of radon radiation is approximately 1.2 mSv.

A number of sources of natural radiation penetrate our bodies through the food we eat, the air we breathe and the water we drink. Potassium-40 is the main source of internal irradiation (aside from radon decay) found in a variety of everyday foods. The average effective dose from these sources is approximately 0.3 mSv a year.

The total worldwide average effective dose from natural radiation is approximately 2.4 mSv a year. However, doses can vary greatly. The following figure shows how Canadian cities and the Canadian average dose compare to other parts of the world. 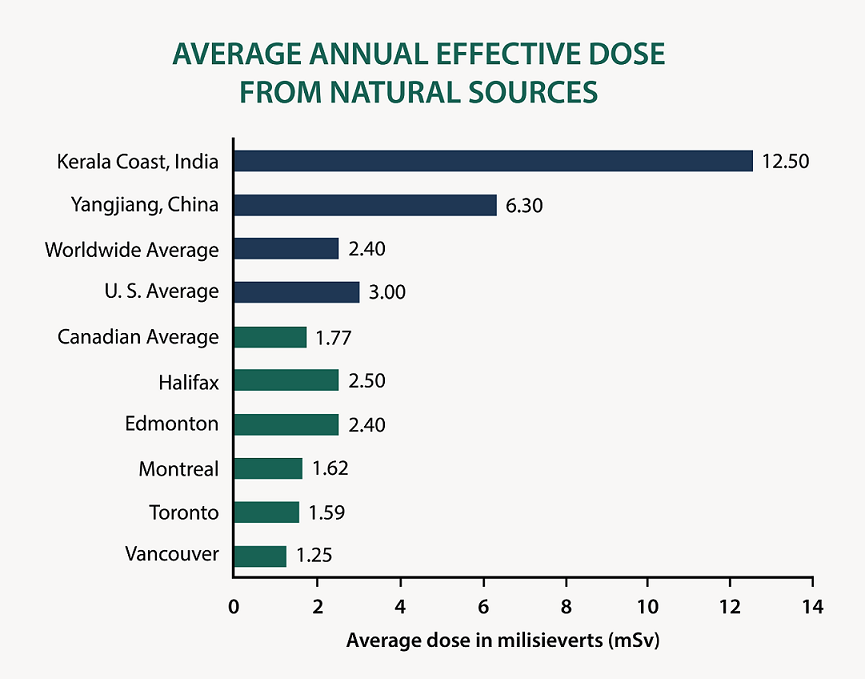