What is depleted uranium?

Depleted uranium or DU is a by-product of uranium enrichment. DU is mildly radioactive, about 60 percent less radioactive than natural uranium.

The main difference between DU and natural uranium is its content of an isotope called U235, which is responsible for nuclear fission. DU contains less U235 than natural uranium.

DU is found in Canada in two main forms: powder (oxides) and metal. Both forms are the result of processing the original DU.

About 1,500 metric tons of DU in different forms, such as oxides (DUO2 and DU3O8) and metal blended with other waste products, are stored at Cameco's Port Hope Conversion Facility.

About 740,000 metric tons of DU, currently in the form of depleted uranium hexafluoride (DUF6.), are stored in cylinders, awaiting further processing for safe disposal.

Canada has very limited inventories of depleted uranium (DU) and does not produce it. The CNSC has nonetheless decided to provide some information on how Canada deals with this material in light of recent developments south of the border. The U.S.A. generates large quantities of DU as a by-product of the uranium enrichment process. On March 18, 2009, the U.S. Nuclear Regulatory Commission (NRC) asked its staff to draft changes to low-level radioactive waste regulations so it could make special requirements for the disposal of large quantities of DU.

Canada does not face the same challenges as the U.S. when it comes to managing large inventories of DU waste. When reviewing proposals for the long-term disposal of the small quantities of DU existing in Canada, the U.S. research will be taken into consideration by the CNSC.

Only one company, Cameco, is licensed to process DU powder (DU3O8) into depleted nuclear fuel, for use in pressurized heavy water reactors like the CANDU reactors. 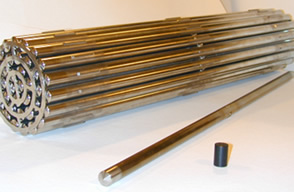 How is DU used in Canada?

Cameco's Port Hope conversion facility processes DU powder, which is then sent to its fuel fabrication plant, also in Port Hope, where the powder is manufactured into bundles.

Depleted nuclear fuel is used to help control reactivity when the reactor is started.

The waste produced from this process is currently stored on site.

DU metal is not currently produced in Canada. Existing DU metal inventories were mostly produced before the 1990 by Cameco Corporation.

DU metal is also found in manufactured equipment and waste. About 400 metric tons of DU metal are currently stored in Canada. Because of its high density and weight, it can be used in industrial or medical applications. In Canada, DU metal is used as a material to:

Canada does not use DU metal in the production of ammunition.

How much DU is imported into Canada?

The remaining 3 percent was DU metal. Most of it came from the international customers of MDS Nordion, who returned shielding medical equipment containing DU metal. As part of its program for customers, MDS Nordion accepts to take care of the dismantling and disposal of the devices. The shielding, which is made of the DU, is sent to a long-term storage site in Chalk River, Ontario.

What health risks are associated with DU?

The main risk linked to DU is not its radioactivity, but its chemical toxicity. Ingestion or inhalation of large quantities of DU can affect the kidney.

If small particles of DU were inhaled in large quantities for a long period of time, the primary health concern would be an increased risk of lung cancer.

Are there some inventories of DU considered waste in Canada?

Yes. Cameco Corporation has about 1,500 metric tons of DU in scrap form at its conversion facility in Port Hope. Most of this comes from the production of DU metal that took place before the 1990. The material is safely kept in storage and is subject to safeguards.

Are there special considerations when disposing of DU?

One of the issues being looked at in the U.S. is the risk related to the increasing radioactivity of DU as time passes. This is important when assessing the long term disposal of large quantities of concentrated DU waste.

Safeguards is a system of international inspections and other verification activities, undertaken by the International Atomic Energy Agency (IAEA) in order to evaluate, on an annual basis, Canada's compliance with its obligations regarding the peaceful use of nuclear material.

Why does DU become more radioactive with time?

Uranium is a radioactive element. Each uranium atom undergoes a series of transformations and emits radiation.

After each transformation, the elements obtained are referred to as radioactive decay products. Eventually, the uranium atom will transform into lead, which is a stable element.

During the enrichment process, U235, U234 and most of the radioactive decay products are separated from the DU. This reduces the radioactivity of the DU to 60 percent of its natural value.

However, as DU continues to decay over time, its radioactivity increases. When it finally reaches balance with its decay products (after no less than 1,000 years), DU becomes at least 40 percent more radioactive than when it was originally produced.

Why is DU's increasing radioactivity important?

DU's increase in radioactivity must be considered when planning long-term disposal in order to reduce the potential risk for persons and the environment.

The potential risk from these increased radioactivity levels is being analyzed by the United States authorities, which must dispose of large quantities of DU. When reviewing proposals for the long-term disposal of the small quantities of DU existing in Canada, the U.S. research will be taken into consideration.

In Canada, the risks associated with the long-term disposal of DU are low. There are three reasons for this:

What Canadian regulations for DU are in place?

Depleted uranium, like other uranium in Canada, is subject to the Nuclear Safety and Control Act and its regulations.

The objective of the Act and its regulations is to protect the health and safety of Canadians and the environment, and to meet international obligations.

The possession, transfer, storage, management or disposal of DU, in a quantity greater than 10 kg require a license from the CNSC.

The possession, transfer, storage and management of DU for the production of aircraft counterweights are not licensed by the CNSC because of an exemption in the regulations that was put into place since it is a non-nuclear use and because of the difficulty in accessing the material.

The International Atomic Energy Agency (IAEA) is an independent body of the United Nations that works for the safe, secure and peaceful uses of nuclear science and technology. Safeguards and verification is one of the three aspects of international co-operation it supports.

According to the Canada/IAEA Safeguards Agreement, DU must be accounted for and is subject to IAEA verification measures to confirm the reported quantities and peaceful use of the material.

This is because DU stills contains some U235, although in smaller concentration than natural uranium.

DU, imported or exported, may also be subject to bilateral nuclear cooperation agreements concluded between Canada and other states.

The import and export of all DU, regardless of quantity, requires a licence issued under the Nuclear Non-Proliferation Import and Export Control Regulations. Containers made of DU metal utilized to transport radioactive material, like tritium gas, are also subject to licensing.

Until the late 1980s, Eldorado Nuclear, predecessor of Cameco Corporation, was licensed to import DU powder from the U.S. to produce DU metal. Part of the product was then returned to the U.S.A., and used to make penetrators for ammunitions.

This activity has not been repeated since. The Canadian Forces no longer use depleted uranium ammunition. All such munitions have been eliminated from the inventories of the Canadian military.

What are the CNSC's conclusions about the long term disposal of DU waste in Canada?

DU is not produced in Canada. Unlike in the U.S., there is no significant or growing inventory of DU in the country.

Current DU inventories in Canada do not pose a threat to the health and safety of the Canadian public or the environment.